You know that quote about golf? How it’s a “good walk spoiled”? Yeah, that’s how I felt about this last 5k race I ran. What was a beautiful course was spoiled by hills. Oh the hills!

So last weekend I took to the park for my first trail run ever. This one was organized by the Brazen Racing group, who organizes a few races throughout the year that, from what I can tell, are well-attended, and held at Wildcat Canyon Regional Park in El Sobrante. Have you done a trail run? They are a completely different animal with all the unpaved and uneven walking trails and hils. While I have ran a handful of hills on my weekly runs, I was still worried about translating my paved road running experience into trail running. Plus, I was running completely blind in that I did not go before the race to check out the course. I pretty much showed up hoping for the best but prepared for the worst.

My Plan B was pretty simple: walk up the hills and run down them. Things were going well until I realized that I couldn’t really run down the hills for the most part because they were uneven, it was difficult to gain a solid footing, and one of the inclines was pretty steep [here’s the elevation profile]. I almost rolled my ankle a few times so I had to slow down and fast walk down instead. It was a bit frustrating to my competitive nature but I had to constantly remind myself that it was okay to take my time; it was the smart thing to do to avoid injury and potentially jeopardizing my training for the 10k in the short term, and my overall ability to run well into the future.

So how was it? Here is the Wildcat Canyon 5k in 3 acts:

Act 2: OMG. I’m going to die. Are they serious with these hills?! 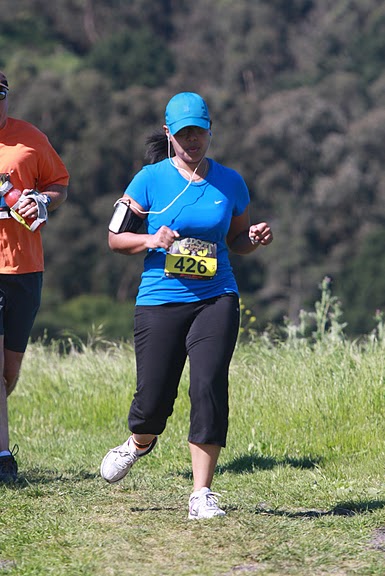 In all actuality, I did have fun on this race. Yes it was an incredible challenge and I probably was only able to run a mile of it TOTAL but I was able to enjoy some amazing views of the bay, views like this:

Total bonus: they had It’s-It ice cream sandwiches as part of their post-run refreshments. So what if I just suffered through a 3.1 mile hike disguised as a run that had me digging my hands into my waist while huffing and puffing my way up the inclines as if that would make it any easier to push my way up the hill while simultaneously cursing myself for thinking I could do this [even though I did], I was excited that I got to reward myself with ice cream. At 9:30 in the morning.